I have been asked by the senior elf at Ales by Mail to give a shout out for their latest imaginative way to put something back in at this busiest time of the year :

As 2011 will soon be drawing to a close, Ales By Mail would like to take this opportunity to recognise that a lot of people have had a hard year - be it from unemployment, financial problems, sickness and so on.

Despite this however, the people of the UK shine through, volunteering for charities, working hard to support their families well, or maybe just being there for a friend in need.

We'd like to hear your stories about people who've done something this year that deserves a special treat (it will be ale, naturally, so no under 18's please!

Visit www.alesbymail.com/stars and fill in the form with details of your nominee.

You can nominate anyone you like (except yourself!), a friend, relative, co-worker, or anyone you think deserves a surprise, and would appreciate real ale of course.

If your nominee is chosen, we'll get in touch with you for delivery details of your nominee, and a surprise package will make its way direct to them in time for Christmas!

Nominate your Christmas Star now! www.alesbymail.com/stars
Posted by The Beer Justice at 09:25 No comments:

Foraging with a Badger

When you're a delinquent blogger who hasn't posted for weeks there is always something nagging your conscience to make sure the blog is not consigned to history -be it a great day out, a memorable beer or a new book to tell people about.

As long ago as the middle of September I was invited for a day of foraging with the lovely folk at Hall and Woodhouse Brewery. I was unsure what relevance this had to beer and as it turned out very little but a good time was had by all.

Here are some of the things I learnt on that day :

The day began at Weymouth, Chesil Beach with a glass of Forager's Nip and a chocolate brownie made with Badger, Poacher's Choice beer. A heady start to a the day.

{Forager's Nip : fill a jar with blackberries, top up to half way with sugar, fill with whisky, shake once a day for a week, store in a dark place for a year. Simples !} 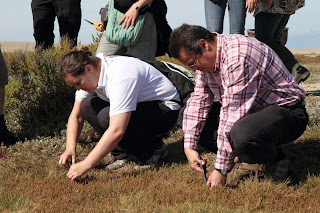 Armed with a pair of scissors and a tub of salt you can gather a feast by the seashore.

It pays to be with an expert and we were accompanied by John Wright who is the country's leading authority on wild food.

Check out his book, Edible Seashore, which is part of the River Cottage Handbook series - a practical guide to foraging for the rich pickings to be found on Britain's seashore. 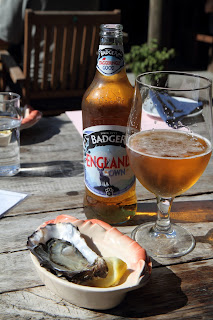 After a morning gathering Marsh Samphire, Wild Thyme, Sea Beet and Wormwood it was time for lunch.

On the strength this quick lunch the food at the Crab House Cafe now has my hearty approval and a mental note is made to revisit sometime.


Badger England's Own with its white grape and elderflower flavors was a delicious accompaniment to the meal - going especially well with a fresh raw oyster farmed on-site. 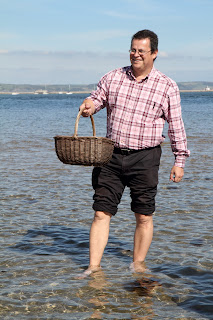 Included for aesthetic purposes only. You can take the boy out of West London ..... 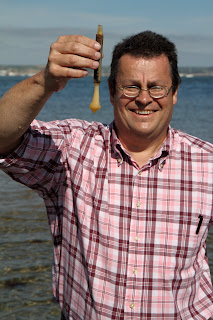 To forage for razor clams visit the tidal waters as the tide is coming in, look for two small holes in the sand, pour in some table salt and the clam will poke his head up.

Grab the head, hold and he will release himself from the sand.

Put him in your pot for your feast later. 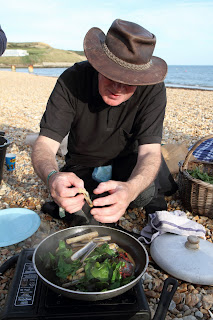 If you rely on your foraging efforts for sustenance you are going to be hungry.

Even the lone crab found in the pots that John had previously set in the waters did not really make a meal for eight though it was great fun getting the stove out and cooking it all up on the beach. No beer to go with it unfortunately (#PRfail)

This proved to be a good starter before the delicious meal that had been laid on at our hotel The Bull in Bridport - again this place has my recommendation and I hope to revisit sometime.

Copious amounts of Badger beers in the splendid company of Mark Woodhouse and his brewing team made a perfect end to the day.


Now, here's some of the really important stuff I discovered on the day :

Hall & Woodhouse have just invested almost £5 million in a new brewery, largely funded by the sale of some land to the side of a pub in Horsham. The brewery is just about finished and will be brewing the range of badger beers imminently. A significant once-in-a-lifetime investment and demonstrable proof of a family's continued commitment to the UK brewing industry.

I am often confused by the range of Badger beers so now I have an aide-memoir. Here is yours :

Thanks to James Peat for the photography.

Thanks to all at Badger for their hospitality.
Posted by The Beer Justice at 11:30 1 comment: 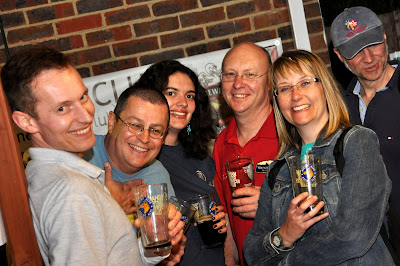 I received a polite bollocking recently from Bob (the Binman) Inman, one of the organisers of the Egham United Services Club Beer Festival because I had failed to give a shout-out for their last beer festival in the Summer.

The truth was that I generally don't publicise an event if I am not planning to attend. Apart from a jam packed diary that week, personally I had also found the beer list a little too focused on new breweries and pandering to the beer ticker community who love finding beers from new breweries.

Now I have nothing against the beer ticker, honestly some of my best friends tick beers, it's just that I find, with a handful of notable exceptions, that new breweries take a while to bed-in and I generally prefer beers from the tried and tested.

Fresh out of their Brewlab courses and after the stresses and strains of actually getting the brewery commissioned, it takes a few recipes, a lot of customer and pub feedback, practice with the equipment, and choices of ingredients before the beer really hits the spot. Some of the brewed-on-a-farm-in-a-bucket brigade never get there but most new brewers will quickly be brewing some good tasty distinctive beers.

I have just taken a look at the list for this week's event and confirm that I am on the case and am keen to recommend a visit to others. Two of my favourite breweries appear again. There are Five beers from Ascot Ales including two from their 8% Last of the Blue Devils range - a cassis and an aniseed. Two special beers appear from Windsor & Eton, a version of the Conqueror dark IPA, this one with added Whiskey plus the very last cask of the special 7.5% version of the same beer. I am not going to miss these.

However, the main reason for attending, and notwithstanding my comments above, is to try again the range of beers from many of London's newest breweries.

The bars will have the very newest London beers, from The Botanist brewpub on Kew Green (7 beers), By the Horns Brewery in Wimbledon (3), Camden Town's latest offerings (2), beer from East London Brewing (1), London Fields Brewery (2), Moncada Brewery (3) and Redchurch (1). All this plus the London Brewers Alliance collaboration IPA the brewing of which I was lucky enough to take part in. 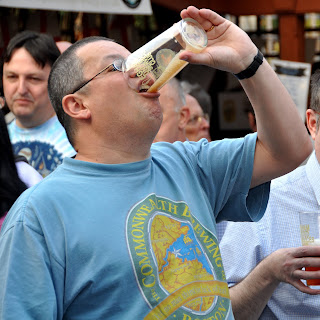 Finally, and probably the most important reason to attend any event, Bob has reminded me with this photo record that I have a great time every time I visit Egham Club beer festivals.

A warm welcome, fantastic hospitality and great beers. What more do you want on an unseasonably warm November eve.

The festival happens from 3rd to 6th from 11am daily. More info here.

See you there !
Posted by The Beer Justice at 08:30 No comments: