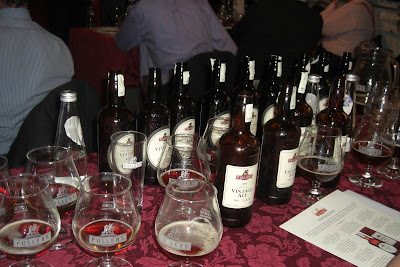 There is plenty that I should be blogging about from recent beer drinking ahead of last night's event but I have to get this written down while it is fresh in my memory.

A memorable evening spent in the company of the great and the good of the beer world, hosted by Fuller's senior executives in their Hock Cellar at the brewery, tasting all fifteen of the Vintage Ales from 1997 to the newly released 2011.

This will be the last time that all Vintages are tasted in one sitting, partly because 15 beers (of 8.5%) in one evening is a stretch for most people but also some of the older Vintages are becoming really scarce. There are only forty bottles left of the 1998. It does not appear in my collection so if you have a bottle left you have a real collectors item. 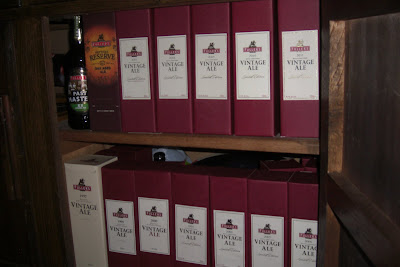 The scarce 1998 now has a savoury character with notes of chocolate and liqueur. it is very smooth with hint of calvados. This was the 14th beer we tasted and my notes are less coherent => "still really good" says it all for me.

My favourite was the 2008 : less oxidised notes, a hint of cherry aroma, slightly more carbonated, still some fresh orange character and a really lovely smooth mouthful.

It was a hard evening. Everyone seemed to have a different favourite but the consensus is that this is a beer that ages very well, from six months to fifteen years there is a a full range of flavour profiles and different ageing characteristics.

Across the piece, each beer was identifiable as a Fuller's Vintage, largely due to the Fuller's yeast bringing its orange marmalade flavours to each beer. The ageing process brought something special to each beer. It is clear that ageing is not a linear process, peaking and then deteriorating; ageing changes the beers in a variable cycle over time. A beer that perhaps is a bit dull after say seven of eight years, can smooth out over the next two or three bringing back a sweetness and fruitiness that is part of the chemical change brought on by time alone. It was interesting to note that each beer still has a viable yeast count and a spritzy carbonation dispelling the myth that the yeast quickly dies in a bottle conditioned beer.

It was enlightening to hear beer discussed in the same serious way that is evident at a vertical vintage wine tasting. This is one of the world's greatest beers and deserves its place at the top table being honoured and revered by beer lovers worldwide.

Fuller's Vintage is brewed each year using the finest ingredients from that vintage. It is based on the recipe for Golden Pride but is bottle conditioned in a numbered limited edition. Once in the bottle the flavours continue to develop over time. Many vintages are always available at the Fuller's Brewery shop and the current edition is usually on the shelf at Waitrose at around £3.50 a bottle. (Approx 50% is sold during each year and the remaining 50% bought in future year by collectors and enthusiasts).

I must give a big thank you to Fuller's for their hospitality. The philosophy, standards and values of the company were at their most evident last night and fully deserve to be shouted about.

Finally in the interest of open disclosure, I am now CAMRA's Brewery Liaison Officer for Fuller's Brewery. It is no secret that I am a fan of Fuller's beers, being the nearest brewery to my home. Don't therefore be surprised to read more about them here in future.
Posted by The Beer Justice at 11:48

Bum bum bum! I wasn't formally invited but I was told about this event so I knew it was on. I did briefly think about asking for an invitation anyway (-: but everyone in our family is falling ill one by one, so I wasn't up to it anyway. )-:

I'm very envious. Of both the tasting and the BLO gig.

We are just in the process of setting up BRO's (Brewery Representative Officers) here for our own Society of Beer Advocates.

Their yeast really is a monster. The Past Masters XX Strong is obviously a Fuller's beer despite how different the ingredients and recipe are from beers in their present range.