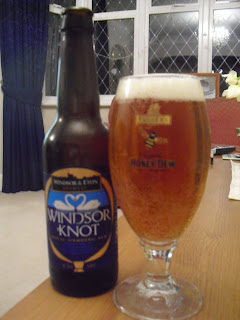 Enough, Enough, I have supped enough royal wedding beers from 1981 and at last someone has saved me. My friends at Windsor & Eton Brewery took pity on me having to drink stale ale and kindly sent over a bottle of their Windsor Knot fresh from the fermenter.

Although W&E are a new brewery, they have quickly stamped their mark on the beer scene in London. Their first two beers, Guardsmen and Knight of the Garter were a fine introduction but it was when the Conqueror hit London pubs before Christmas that it became clear that this was no ordinary new microbrewery. Conqueror is a "black IPA" and was considered at the time a risky experiment for such a new boy on the scene. However it really hit the mark and was a great success. I gave it a plug here and can still vouch that it remains a most tasty beer that is still a first choice whenever I see it. 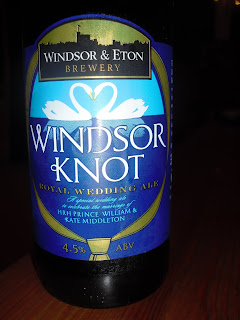 The Royal Wedding beer, Windsor Knot - not the only beer of that name but clearly the one with the strongest provenance - is another beer packed with hop character. Sovereign (UK)and Nelson Sauvin (NZ) to represent the home and away of the Empire, oops I mean Commonwealth.

Golden in colour, with a refreshing taste and aroma of tropical fruits, this beer really hit the spot. Only 4% in strength but with the fortitude to satisfy and a long bitter finish that begs the next sip.

I am a big fan of 330ml beers especially for strong beers or those that need to be drunk cold. However on this occasion it was not enough, I wanted more. This beer was so good that I could have managed a 5 litre mini-cask and still not been satisfied.

On Twitter the other day, @thegunmakers tweeted "I'm calling it : @WindsorEtonBrew is the best new brewery in SE England for a long while ..."

I going to try to get down to the Gunmakers beer festival before the week is out to reacquaint myself with this beer in its cask form - and in a measure greater than 330ml.

You have not got long to take advantage of this year's wedding beers but if you want something with which to toast the happy couple, and the subsequent happy coupling, you should snap up a bottle or even a 5l mini-cask of Windsor Knot. Recommended !
Posted by The Beer Justice at 15:22

Had some of the Windsor Knot at the Gunmakers last night. perfectly drinkable, but didn't blow me away like the conquerer did! they've also got the Ascot Royal IPA on which [whisper it] is a bit like greene king IPA...

Saw several other Royal Wedding bottles up at Kris Wines over the weekend, reckon they'll all be on cheap next week ;)

It seems like most of these new wedding ales coming out for the occasion are pretty love in ABV. The only one I've seen so far that could probably stand up to a crazy 20 years in the bottle is the 10% Durham Something Blue.

Indeed, it would seem that the tradition for brewing a strong ale to celebrate a royal event such as a wedding or coronation has gone in favour of drinkability. I guess we are living in a more commercial world. Harvey's Nuptial Ale is 6% - truer to tradition.

Had some Windsor Knot in Wetherspoon's.

Ho ho, how we laughed!