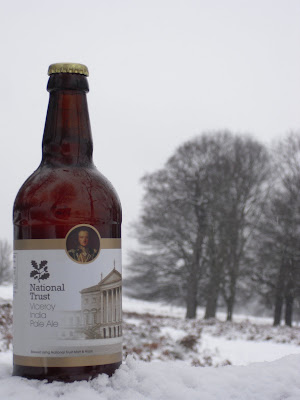 Staying on an IPA theme it is about time that I gave a shout out to the new National Trust beer that Robert Wicks from Westerham Brewery sent me long before Christmas.

The beer is a traditional IPA style beer called National Trust - Viceroy India Pale Ale. It is named with a nod to Lord Curzon who was Viceroy of India and responsible for the restoration of historic buildings, notably the Taj Mahal. At the end of his tour of duty, he returned to England and set his mind to our own historic buildings hence the connection with the National Trust. He was also a great beer drinker.

The beer itself is a 5% bottle conditioned, India Pale Ale, brewed at Westerham Brewery in Kent using organic malt and hops from the local Little Scotney estate, another connection with the National Trust.

The beer is amber coloured and pours with a fluffy white head. The hop aroma hits you first with appetising floral and grassy notes enticing the first slug. The flavour is big, with a spicy hop bitterness that envelopes the tasty honey and apricot sweetness. The finish is long, dry and bitter to the end. This beer is delicious, the bottle carbonation giving enough tartness to cut through the resinous, peppery hop character. It is a very distinct and complex beer. 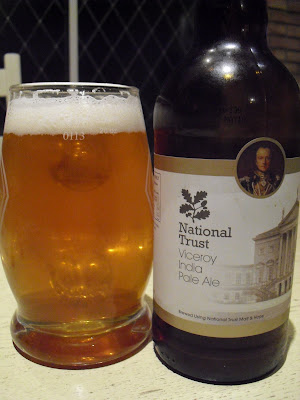 It is brave of Westerham Brewery and National Trust to agree that their beer should have such character. It would have been very easy to bring a drinkable but dumbed down IPA style beer for the visitors to National Trust properties. This will usually be a one-off discretionary purchase by visitors wanting to put a bit more into the Trust funds. They are going to get a pleasant surprise when they taste it. 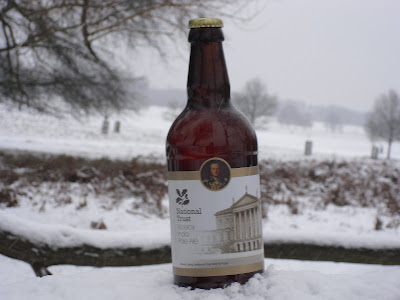 Blimey! Is that a big bottle next to a bonsai tree?

Waldo, You're supposed to say "What a lovely photo, it really makes you want to go and buy the beer" :-) Steve

Nice one Steve, sounds great. Can you only get it from National Trust sites? I like Westerham and they are the most local brewery to me - Wetherspoons always have a couple of theirs on. I should try and head up there sometime for a look around.

I'm intrigued by these 'gift shop' beers. Lots of them seem like rebadges of existing beers, but not always. The bottle of Ballard's Wassail we got at the tower of London was dreadful.

Mark, The beer is on sale for £3 a bottle in National Trust shops that are licensed and from independent beer retailers in the south-east - though I have never seen it you may be luckier nearer the brewery. From the brewery direct it costs £23 for a case of 12 bottles plus £7 post and packing. 01732 864427. Robert Wicks is one of the beer world's good guys. If they are nearby, I recommend a visit. Steve